My current scenario is that I have lots of inputs from cameras and lots of viewers. Therefore, this option will be the best fit for my case. 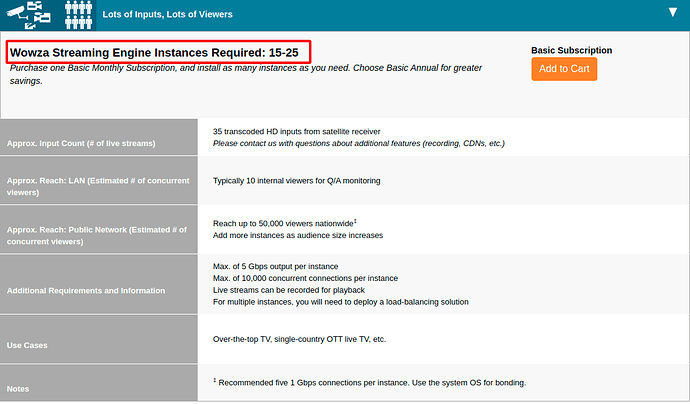 The website says that at least 15-25 Wowza Streaming Engine instances deal with my problem. My question is:

This is 3 incoming streams and this is 10 viewer connections or 10 Stream Targets. Basically, connections = streams going out.

For the paid license:

10 concurrent channels means: The limit is 10 streams being simultaneously fed to Wowza and being transcoded from multiple cameras, encoders, etc. at the same time.

An instance is a single copy of Wowza Streaming Engine server software running on a single physical or virtual computer. You can have one license key and add Engine server instances under that same key for a additional charge.

You can have several streaming applications under one single instance or one Engine server. But, as far as when it’s time to add a second instance or Engine server that can depend on what you can handle as far as CPU/GPU capacity, network capacity and how much you are transcoding since transcodin can use up a lot of resources.

For example, we have some customers that have 200 streams though one single Engine instance, but again don’t lock that it in as a max because it depends on your what your system can handle.

So, back to the 10 concurrent channels, that is confusing and I’ll get that language changed, but channel in that sentence should really say streams being transcoded.. The word channel is what makes this a bit confusing I think so just know that means stream being transcoded.

The reason there is a charge above 10 incoming streams being transcoded is the additional resources that requires on the Wowza side.

Connections are streams going out from wowza to a viewer or a stream target like FB.
Channel is stream being transcoded.