What do ESPN, Microsoft, and Al Jazeera share in common? All three power their live broadcasts with Secure Reliable Transport (SRT). The cutting-edge protocol has quickly gained prominence for its ability to deliver smooth streams, minimal lag, and pristine video quality.

SRT is an RTMP alternative designed by Haivision to transport low-latency streams over noisy networks. The open-source protocol addresses the challenges of remote video contribution while maintaining speedy delivery.

Now for a paragraph rife with hyphens and acronyms (something hard to avoid in the streaming industry):

By combining the lightning-fast speed of UDP with TCP’s error-correction qualities, SRT delivers reliable, low-latency streams — regardless of network quality. Broadcasters using it benefit from packet loss recovery, simplified firewall traversal, and the ability to encrypt the stream for end-to-end security.

Why Do We Care?

So you’ve seen the wordy definition and quick rundown, but what does it all mean?

Picture this: a major livestock dealer is holding a cattle auction in rural Wyoming. The dealer would like to open up the bidding pool to those unable to physically attend by broadcasting the event around the world.

Low-latency video delivery is crucial. Any delay could prevent legitimate bids from being recorded. The video and audio quality also need to be on point for viewers. But in such remote locations, broadcasters seldom have the luxury of excessive bandwidth.

Broadcasting the live auction would require satellite uplinks and result in a five-second delay. This route would also stand in the way of global distribution over the internet. Additionally, satellite trucks come at a very high price.

If the livestock dealer were to take the live streaming route instead, similar concerns pop up. Streaming over a spotty public network is a no-no, thus requiring dedicated fiber links or MPLS. Using private network infrastructure is the best approach, but it’s costly and challenging to orchestrate. And regardless of network, latency climbs high in most streaming workflows. The majority of broadcasters surveyed in our Video Streaming Latency Report indicated that they experienced latency in the 10-45 second range.

SRT to the Rescue

By streaming over the public internet using SRT, the auction house wouldn’t have to worry about any of this. SRT takes the variables out of remote event production by ensuring smooth playback on questionable networks. It’s also low-latency, cost-effective, and simple to deploy.

In this way, SRT enables a layer of error-correction that reduces the need for expensive network infrastructure. Technologies that SRT may prevent needing to be deployed include:

The best-case scenario would be to only transport live streams across protected networks. However, that isn’t realistic for use cases ranging from remote news broadcasts to live sports. Haivision came to this realization in 2012 and began developing SRT as a solution.

The protocol was first demoed at IBC the year after that, and Haivision soon released it as part of their product family.

Even so, there’s a long history of proprietary technologies clashing in the streaming industry, and thereby making video delivery unnecessarily complicated. As long as SRT remained a closed technology, widespread adoption would be stifled. So, Haivision joined forces with Wowza to create the SRT alliance in 2017.

“The mission of the SRT Alliance is to overcome the challenges of low-latency video streaming, thereby changing the way the world streams. Fundamental to this mission is the support of a freely available open-source video transport protocol that will accelerate innovation through collaborative development. The SRT Alliance will promote the industry-wide recognition and adoption of SRT as a common standard for all low-latency internet streaming.”

Haivision subsequently released SRT on GitHub to encourage interoperability, as well as a comprehensive 90-page technical overview that serves as the spec.

Today, more than 450 technology vendors are actively collaborating to ensure that SRT becomes the standard low-latency technology in the broadcast and streaming industries. Organizations ranging from the NFL to Fox News rely on SRT to power their workflows. And the protocol is widely believed to be the future of streaming.

Because SRT is being developed through a community-driven effort led by industry titans, it helps mitigate the fragmentation that has plagued streaming for so long by serving as an industry-wide solution. This, in turn, has fostered adoption across an ecosystem where everything interoperates.

The Technology Behind SRT

When it comes to the technology behind SRT, Matrox puts it nicely:

“SRT takes some of the best aspects of User Datagram Protocol (UDP), such as low latency, but adds error-checking to match the reliability of Transmission Control Protocol/Internet Protocol (TCP/IP). While TCP/IP handles all data profiles and is optimal for its job, SRT can address high-performance video specifically.”

UDP and TCP are both core components of the internet protocol suite, residing in the transport layer. Streaming protocols like SRT sit on top of these.

TCP is quite reliable and can solve for packet loss and ordering. UDP, on the other hand, starts without requiring any handshake. It transports data regardless of any bandwidth constraints, making it speedier and riskier.

Check out our blog on the subject for a full breakdown. The takeaway here is that SRT fuses the benefits of both.

Specifically, the UDP-based protocol leverages an error-correction mechanism for packet recovery called Automatic Repeat ReQuest (ARQ). If the receiver (server) recognizes a gap in the stream, it re-requests those packets from the sender (encoder) via a negative acknowledgment (NAK) packet. The genius of this is that even though the sender and receiver remain in conversation throughout the transmission to make sure all packets make their way to the finish line, only the missing packets get retransmitted. In this way, it doesn’t cause a mess of overhead or extensive latency.

By combining the speed of UDP and the reliability of TCP, SRT gives us a comprehensive list of benefits. Let’s take a closer look.

Use Cases and Success Stories

SRT is popular for use cases involving unstable or unreliable networks. Any streaming workflow complicated by first-mile challenges can benefit from this technology. It’s also an excellent protocol for building two-way applications and syndicating streams from multiple sources.

Below are some of our favorite SRT success stories.

During the 2020 NFL Draft, SRT was the real MVP. The NFL used this game-changing technology to connect 600 live feeds for the first entirely virtual Draft. Each time Roger Goodell announced a pick, we had SRT to thank.

Additionally, the NFL’s instant replay review process runs on SRT. The league was able to ditch their IP VPN while still delivering live feeds from the field back to New York in near real time. That way, all reviewers are looking at the same play.

When streaming from a crowded convention center with everyone fighting over the same network, SRT comes in handy. In fact, Microsoft counts on the protocol to power its workflows for global events like Ignite. Microsoft and Azure teamed up to develop the SRT Hub, a cloud-based service for routing media across the Microsoft Azure backbone. Tens of thousands of hours of content coming from more than 40 locations are efficiently streamed during Microsoft’s conferences — all thanks to SRT.

Al Jazeera uses SRT for low-latency content acquisition and global distribution. The media conglomerate transports breaking news from the field to remote bureaus for international syndication. This eliminates the costs and technical headaches that come with satellite and MPLS networks, while also ensuring that news gets out to the public as it’s unfolding.

ESPN relies on SRT to broadcast content from universities across the United States, eliminating the need for satellite uplinks with a much more cost-effective solution. The result is something every broadcaster is trying to achieve: more content at a lower cost. Plus, games that usually wouldn’t even make it on TV are distributed on a national platform.

One notable limitation of SRT is that it’s not as widely supported for playback as technologies like HTTP Live Streaming (HLS). For that reason, most SRT-based workflows leverage a streaming server or service to repackage the content.

Watch the video below to see how it works.

It would behoove anyone broadcasting from a hardware encoder and ingesting their live streams into a streaming server or service to consider replacing RTMP with SRT.

While RTMP remains the most common protocol for video contribution, the dated technology simply wasn’t designed for interactivity. And in terms of end-to-end latency and video quality, SRT outperforms RTMP by a landslide.

What’s more, RTMP lacks momentum. Support for the protocol is waning, and it hasn’t evolved to keep up with new codecs or streaming functionalities like ad insertion. With RTMP, HEVC encoded streams are not an option, limiting one’s ability to stream high-resolution content.

“Legacy protocols such as real-time messaging protocol (RTMP), developed over a decade ago to encode video and move it across networks to clients, will likely be displaced by newer solutions such as Secure Reliable Transport (SRT), designed to further decrease latency and meet the demands of live and on-demand streaming.”

We’d tend to agree. When it comes to first-mile contribution streaming (a.k.a. ingest), SRT is the way to go. It achieves that elusive combination of high-quality and low- latency that every live producer seems to be chasing.

Challenged to deliver high-quality streams over suboptimal networks? Looking to achieve low-latency content acquisition despite an iffy connection to the ingest point? Searching for a high-performance alternative to RTMP?

Look no further than SRT. Just know that you might want to transmux the content for large-scale delivery. And for that, Wowza’s technology stands at the ready. 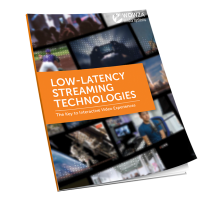