The year may have dragged on, but 2020 has finally reached end of life. And one of the few silver linings to the COVID-19 pandemic has been the ability of technology to overcome its myriad obstacles.

Video streaming has become a part of everyday life. No matter the industry or challenge, it’s fueled digital transformation for businesses adapting to the new normal.

So, what topics have been trending in the streaming industry? We’ve compiled a list of this year’s most popular blog posts below.

In the early days of streaming, Flash Player and the Real-Time Messaging Protocol (RTMP) were the dominant delivery mechanisms. When used together, these technologies supported lightning-fast video delivery with around five seconds of latency.

The majority of encoders today can transmit RTMP, and most media servers can receive it. Even big social media players such as Facebook, YouTube, Twitch, and Periscope accept it. But RTMP streams run into compatibility issues when it comes to playback on popular browsers and devices.

Many broadcasters choose to transport live streams to their media server using RTMP and then transcode them for delivery to a range of players and devices. In other words, RTMP streaming is alive and well for content contribution—just not last-mile delivery.

Live, But Not Live: How To Publish a Pre-Recorded Video as a Live Stream

Wowza Streaming Engine gives broadcasters the ability to publish an MP4 file as a live stream. That’s right. You can publish a pre-recorded video that appears as though it’s live in social media feeds, streaming apps, and websites. Wowza’s StreamPublisher module makes it easy, allowing you to configure one or more MP4 files (ranging from seconds to hours long) in a playlist that loops endlessly.

But why would anybody want to do that? It turns out that there are several good reasons. In fact, chances are you’ve already viewed pre-recorded content posing as a live stream without realizing it.

What Is HLS (HTTP Live Streaming)?

This year marks the end-of-life date for Adobe Flash—which is why Apple’s HTTP Live Streaming (HLS) protocol has become the preferred way to deliver streaming video to users. In our 2019 Video Streaming Latency Report, more than 45% of participants indicated that they use the HLS protocol for content distribution.

The popularity of HLS over its alternatives can be chalked up to playback compatibility and quality of experience. All Mac, Android, Microsoft, and Linux devices can play streams delivered using HLS. And because HLS supports adaptive bitrate streaming, broadcasters can rely on it to deliver high-quality streams to users with outstanding bandwidth and processing power while also accommodating those who are lacking in the speed and power departments.

Secure Video Streaming: How To Protect Your Content With Wowza

Successfully delivering live and on-demand video content starts with choosing a secure streaming platform. Unauthorized access can compromise the revenue-boosting strategies of subscription and pay-per-view services. And when a streaming implementation involves sensitive or private data, protection is key.

Wowza offers content protection at every step of the workflow, including encryption of incoming and outcoming streams, token authentication, and digital rights management (DRM) for premium content delivery. Layering several security features is often a good idea because it provides more holistic defense against piracy, hacking, and other cyberattacks.

With the COVID-19 pandemic, we’ve seen rapid growth in the role video streaming plays in everyday life. For problems big and small—with applications both nuanced and broad—streaming delivers the flexibility required for wide-ranging adoption. What’s more, the technology has become increasingly accessible in recent years.

This report details the biggest trends in live streaming, next-generation applications that will go mainstream, critical technologies paving the way, and our predictions for the decade ahead.

WebRTC Signaling Servers: Everything You Need to Know

Although WebRTC is a peer-to-peer protocol, servers still play a critical role in connecting sessions properly. The most basic servers operating in the background are signaling servers, which help manage the connection between two communicating devices.

Live Streaming in China: A Look Inside the Multi-Billion Dollar Industry

China is undergoing a digital transformation at an unmatched rate. As a result, video streaming has found its way into markets as distinct as agriculture, dating, and online gaming.

While a complex mix of political and cultural factors is shaping this phenomenon in China, the country’s advanced digital ecosystem is also influencing business models across the world.

The Real-Time Streaming Protocol (RTSP) is a tried-and-true technology used to control audio/video transmission between two endpoints and facilitate the transportation of low-latency streaming content across the internet.

Along with the Real-Time Messaging Protocol (RTMP), RTSP once dominated the video streaming landscape. Although that’s no longer the case today, RTSP remains standard in many surveillance and closed-circuit television (CCTV) architectures. The reason for this is simple: it’s still the protocol of choice for IP cameras.

VOD Streaming: What It Is and How It Relates to OTT

In the age of COVID-19, video on demand (VOD) has taken over. Trolls World Tour, The Invisible Man, and countless other planned theatrical releases went “direct to VOD” when theaters closed their doors. Not only were viewers able to skip a trip to the box office or Redbox kiosk, but they were able to stream these movies at their convenience instead of having to be constrained by static showtimes.

YouTube’s David After Dentist and Netflix’s Stranger Things are both prime examples of VOD content — the former being AVOD, and the latter SVOD. But VOD isn’t restricted to the media and entertainment industry. Doctors in training now rely on VOD streams of surgeries to further their education, and enterprises leverage on-demand streaming for everything from employee training to customer education.

The COVID-19 pandemic has resulted in more screen time than ever for those of us stuck at home. And whether you’ve been bingeing content on Netflix or YouTube, the MPEG-DASH protocol has likely played a role.

MPEG-DASH is an adaptive HTTP-based protocol designed for streaming media over the internet. The technology is used to transport segments of live and on-demand video content from web servers to viewers’ devices. 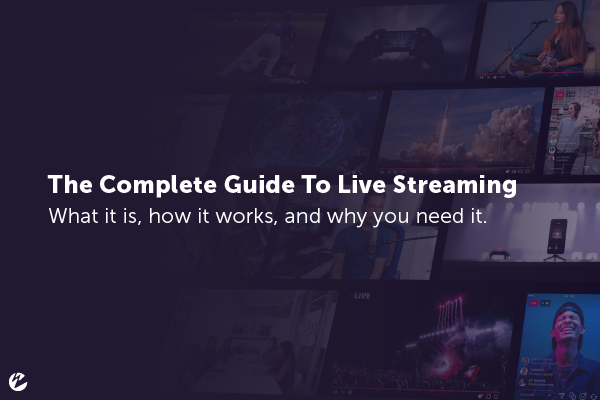